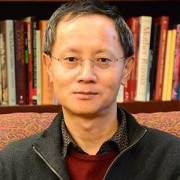 Hai Ren is Associate Professor of East Asian Studies, Anthropology, Social, Cultural & Critical Theory, and Applied Intercultural Arts Research at the University of Arizona. He is also a Bayu Scholar of the City of Chongqing, and a Distinguished Professor of Art at Sichuan Fine Arts Institute. He directs the Center for Research-Oriented Art, a joint research project between the University of Arizona and Sichuan Fine Arts Institute. His publications include studies of socially engaged art, research-oriented art, public history, object-oriented anthropology, urban studies, comparative media and technology, popular culture, and critical theory. He is the author of Neoliberalism and Culture in China and Hong Kong: The Countdown of Time (Routledge, 2010) and The Middle Class in Neoliberal China: Governing Risk, Life-Building, and Themed Spaces (Routledge, 2013), and co-editor (with Ann Anagnost and Andrea Arai) of Global Futures in East Asia: Youth, Nation, and the New Economy in Uncertain Times (Stanford University Press, 2013). He is completing a book manuscript on the city as an assemblage of objects, editing another on socially engaged art, and making a film on sculpture as a metaphor.